I know this blog is called “Read This Comic!” and I’m trying to be positive and everything, but I took some shots at Brian Michael Bendis, Jeph Loeb, and Mark Millar in my conversation with Forrest earlier this week. Basically, I was like “Warren Ellis is awesome and these guys suck. Farts!” And Forrest responded with the calm, cool, collectedness of a well-mannered Michiganian and said “Well, why don’t you like them?” I responded with more harsh insults, and may have besmirched Mr. Vin Diesel as well. For all of this I apologize. But then Forrest texted me about some comics he had bought, including Uncanny X-Men #1 by Brian Michael Bendis and Chris Bachalo. I responded with, “Bachalo’s art is amazing, but I hate Bendis’s dialogue.” Look below, the art IS amazing: 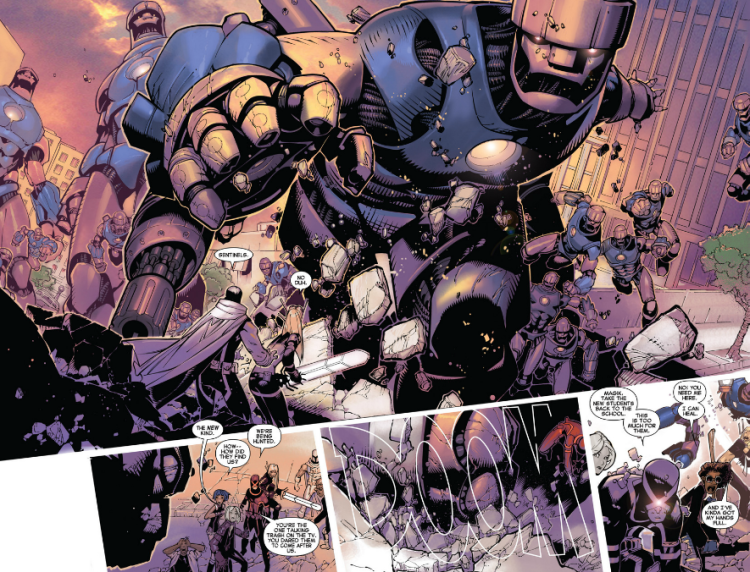 But most of the comic book is filled with scenes like this:

But not so much anymore.

A lot of comic book readers go through cycles of not reading comics. This is generally because we’ve hit a wall with superhero comics. After one such period between high school and college (I thought I was going to get girls the instant I stopped reading comics. Excuse me while I point and laugh at teenage me. Hahahahahahahahahahahahaha, you IDIOT!), I was starting to get back in. While at first I was reading books I was already reading before (X-Men, mainly), I quickly added a number of new titles to my reading pile, including Daredevil, Ultimate Spider-Man, and Alias. Those three were all written by one guy: Brian Michael Bendis. Or BENDIS! as he became known amongst my friends and I.

My beef with Bendis started when I read a few of his comics back to back. I don’t recall which ones at the time, but it became obvious that they all sounded the same. A blind lawyer with super powers, a geeky teenager with spider-powers, and a hard drinking female detective all sounded the same. As did their supporting casts.

On top of that, exposition moments seemed to happen a lot. Bendis tends to write a ton of scenes where characters ask a question, are answered, the answer is restated as a question (peppered with some disbelief), in order to introduce a character, concept or situation. It was entertaining at first, but after seeing it a number of times it lost it’s appeal for me.

These are all things that turned me off Bendis as a writer. I still like (most of) his comics that I read when I was younger. I think a number of his Ultimate Spider-Man stories hold up, and can serve as a great introduction to the character. I LOVE his collaboration on Alias with Michael Gaydos, and highly recommend it. It’s not digital yet, but you should still be able to get the trade paperbacks.

My main issue with Bendis, is that I don’t believe he’s really tried anything different in his comic book work. He brought in his style, which was new and interesting at first, but then kept doing it. You can argue that any number of popular writers does, this, but again, this is about me not liking his work. If I was a better writer, I’d probably do a better job illustrating why I don’t like him.

No. It has nothing to do with the television show. It’s a well done story about a broken woman trying to find herself. And she happens to have super powers and live in the Marvel Universe. It’s really good.

So should I read this comic?