Skip to the content
It’s been awhile, but it’s time for another round of Warren Ellis and Darick Robertson’s Transmetropolitan discussion with my good pal, Forrest! As always, there are spoilers, but at this point we’re really just calling out our favorite moments from the book while going off on tangents…whiiich, I think we’ve already been doing, but you should read this comic so you’ll know what we’re talking about when we ARE on topic. We started this chat with me waiting for Forrest to finish watching The Fast and the Furious 6 trailer.
Forrest: Hola!
Paul:  Hey compadre.
Forrest: How’s it going?
Paul: I’m surprised you could tear your eyes away from Vin Diesel’s Facebook page.
Forrest: Well…
Paul: It’s open in another window, isn’t it?
Forrest: …yes
Paul: We go MONTHS without talking about Transmet because you were waiting to hear Fast 6 news, and you can’t break away from it for 5 minutes… jeez.
Forrest: Haha.
(We then went off on a tangent about honeymoons and Disney World. You don’t need to read that, and that’s about as much context as I’m going to give you for this segue!)
Paul: So, speaking of drunk Disney…Comic Books!!!
Forrest: Yes! So what’s with this image you sent me? Is it more work by Darick Robertson? 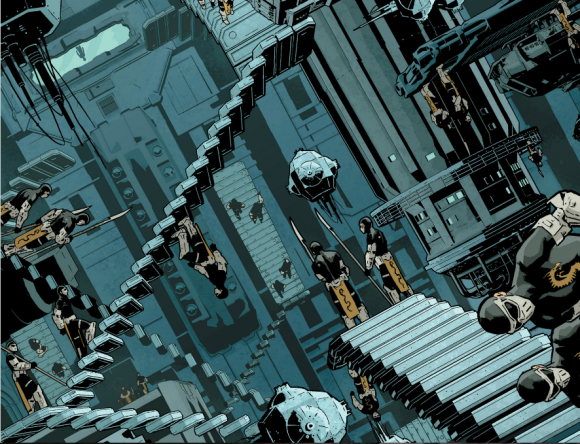 Paul: No, it’s by David Aja. An artist who in that spread, was paired with Warren Ellis on a series called Secret Avengers.
Forrest: Ah, I’ve heard good things about that. I like the sci-fi Escher vibe.
Paul: Yes, he did six issues, each one standalone, each paired with a different artist. And even on a series that he probably didn’t invest much in, he told a great story, filled with action, snark, and basic human decency.
Forrest: Somehow I’m guessing he didn’t also find a way to fit in an evil politician ejaculating into an American Flag…
Paul: No, Basically, I just wanted to share another way in which Ellis is awesome…and how he helps elevate the form of comics storytelling rather than just aping popular elements from other mediums like Millar, Loeb, or Bendis.
I started positive and moved to mini rant…
Forrest: Sounds like you have some beef!
Paul: I do…oh, I do. In general, I’m tired of people who settle for what IS versus those who will strive for what can be. And Ellis is a creator who strives, even when on superhero work that he’s deemed ‘beneath him.’
Forrest: I do love Ellis for all he is, but I’m not sure it’s entirely fair to say his influences don’t bleed through. Spider probably couldn’t exist without Hunter S. Thompson, for one. And I’ve been reading a bit of 2000 AD ever since watching the excellent, underrated Dredd last year, and the whole culture of Transmetropolitan seems indebted to Mega City One.
Paul: Yes, that’s fair. I guess I’m saying that in spite of that, he still has his own distinct style, which works, where as the others I cited tend to have styles that are more formulaic. The thing that always shines through for me with Ellis is characters who are gruff and curmudgeonly, but have a wonderful decency that can’t help but shine through.

I need a thesaurus or less beer…
Forrest: Or more beer! Always more beer.
Paul: You’re right. So anyway, drive by snipes at other creators aside, I did prepare notes for our chat about Transmet!
Forrest: I’m torn, because I’ve read and enjoyed things by all of those guys, but I also don’t disagree with you. Something you said dovetails with a feeling I had while reading these latest issues, but we can come back to it later if you’d like
Paul: Well, let’s keep going with it. I do enjoy specific works by each of those creators…Millar’s Ultimates and Ultimate X-Men, Bendis’s Daredevil and Alias…and I can barely take Loeb’s Long Halloween, but any enjoyment I take from his work is generally attributed to his artists. So what was your reaction to these issues that dovetails with my thoughts?
Forrest: Basically, to play devil’s advocate (I trust my love for Transmetropolitan doesn’t need to be defended at this point!), there were times in these volumes where Spider does things that are so casually cruel, that it almost breaks the delicate balance of his gruff side with his hidden, heartwarming side. They’re almost always played for laughs, and I can write them off just as funny sight gags or naughty asides, but it does tend to remind me that I’m reading a comic. I guess I lose some of my investment in him as a character when he’s just a dick.
Paul: He does almost go over the edge sometimes, but he is operating in a heightened world, full of even more terrible people than our real one. Or rather, more overtly terrible people than our reality. Though with every passing day, Ellis must get more and more tweets that say “Transmet is coming true!”
Forrest: That’s true. Oh god, I’m going to be one of those shocked old people who clucks his tongue at those rude kids someday, aren’t I?
Paul: …Forrest…you already are! Dun Dun DUUUUN.
I had a moment today where I wished I was Spider Jerusalem.
Forrest: Oh yeah, what happened?
Paul: There was a guy on the train speaking aloud to everyone about how he was a member of the NSA, and if there were any fellow agents on the train, they shouldn’t be afraid to talk to him…whatever people had said about him wasn’t true.
Forrest: Oh boy
Paul: And I thought to myself, rather than using the shields of an iPod and Kindle, Spider would engage this guy, listen to his story. Not worry about the guy eating his face. That’s what’s wonderful for me about Spider and many of Ellis’s protagonists is that he’s better than me and worse then me in complimentary manners. He cares more about people, he’s more selfless, but he’s also more full of himself, more careless about those close to him, and drinks a shit-ton more.
Forrest: That’s what gives him his power – both in the book, and in our minds as we read the comic. He goes to that extreme that we all wish we could in our best/worst moments. He goes places we wish someone would. Really, that’s what all “heroes” do, in any form of storytelling. Give us a glimpse of what we wish we could be, good or bad. 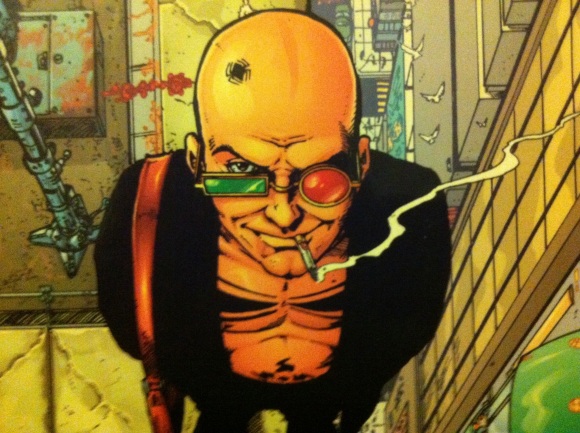 […] and everything, but I took some shots at Brian Michael Bendis, Jeph Loeb, and Mark Millar in my conversation with Forrest earlier this week. Basically, I was like “Warren Ellis is awesome and these guys suck. Farts!” And […]