John McClane: “How about some Christmas music?”

Argyle: “MAN, this IS Christmas music!”

Christmas comics! So, it’s the holiday season (Note: I will used “Christmas” and “Holiday” interchangeably because I don’t give a shit about being all-inclusive OR about “keeping Christmas” in things. The exception being of course, Die Hard, as all Die Hard films should take place at Christmas), and while some of us like to contemplate realities in which we’ve never been born or look back in the ways that we’ve fallen short in helping our fellow man, some of us just want to relax and enjoy some Yuletide specials in the form of television, movies, or…COMICS!

So I scanned through the comic books that I own. And, it turns out I don’t have a lot of holiday/Xmas comic books anymore (I miss you so much, Howard the Duck Holiday Special!). And on top of that, most of them follow a couple of basic formulas:

1) Hero fights villain or criminal. They stop fighting in recognition of the season, and drink eggnog, or rebuild the orphanage they’ve just wrecked with their super powered fight.

2) Earthbound hero explains holiday customs to alien hero. Alien hero doesn’t get it. BUT THEN THEY DO. “Hark, the herald angels siiiing…”

3) Badass heroes that can’t take part in holiday mushiness are ultimately moved by it and then partake. (Wolverine says “Aw, shucks bub,” and drinks eggnog.)

Sometimes, when done well, these scenarios can work out (Both in Batman: The Animated Series and in the Justice League animated series. Both great, but not comics, so we shan’t be discussing them now!) But most of the time they beat your head in with a hammer with holiday “cheer” like an ABC Family original movie starring Jenny McCarthy.

Exhibit 1: The DC Comics 2009 Holiday Special. There are ten…TEN stories in this comic. Nine of them are the mediocre stuff I’ve described. Some decent artwork that elevates it a bit, but mainly the hammering in the head thing with the messaging and Zuzu’s flowers and such. The one in the bunch that’s good? The one with NO FUCKING WORDS. 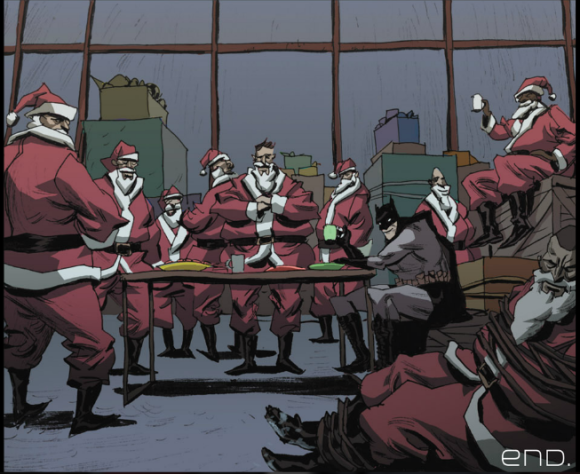 Batman pursues a criminal dressed as Santa Claus in this short by Jay Faerber and Peter Nguyen. He chases the criminal into a warehouse full of Santas, who are not the criminal’s buddies, but a pack of innocent Santas that invite Batman to share milk and cookies with them after he’s successfully stopped the robber.

The rest of the comic involves Snow Golems, the Flash not buying a present for his wife (and wackiness ensues!), and some other garbage that’s not worth your time or mine. I’m really going contrary to my own purposes in starting this blog in being so dismissive of this comic, but I feel I need the context of the bad in order to make y’all appreciate the good.

The Last Christmas by Gerry Duggan, Brian Poeshn and Rick Remender is a post-apocalyptic romp, that puts Santa Claus and his crew into a blend of und comedy mixed with a redemption/revenge tale. Marauders attack The North Pole and kill Mrs. Claus. Santa can’t die though, because one kid still believes in him. What starts as an attempt to KILL said child quickly turns into a heartwarming tale in which everyone learns the true meaning of Christmas and to love again. Well, not really, but Santa, his elves, and a bunch of survivors mess some dudes up. And a kid gets a bike. 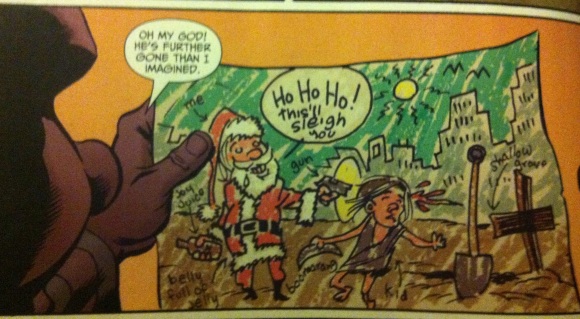 The Last Christmas contains plenty of one-liner jokes and references to classic Christmas specials and tales, but these are ornaments to a tree built on a hilarious and fucked up concept of a gun toting Santa Claus in a post-apocalyptic wasteland. This comic is doing it’s own thing, and it does it well.

And then there’s Hawkeye #6. It’s been two weeks, right? So it’s about time for me to shower praise yet again on my favorite comic book for delivering a solid holiday jam. There’s a Spotify playlist created by David Aja, the artist of this fine comic book, to go along with it as you read: Hawkeye #6. But anyway, Aja, Matt Fraction, and the rest of the gang (Sorry Chris Eliopoulos and Matt Hollingsworth, carpal tunnel…shit, I typed their names anyway…dammit!).

Anyway, the whole Hawkeye team puts together a great book that not only builds on the issues that have come before it, but presents a solid standalone tale of a man who feels the need to cut loose from his various entanglements, both for his sake and for the sake of others. 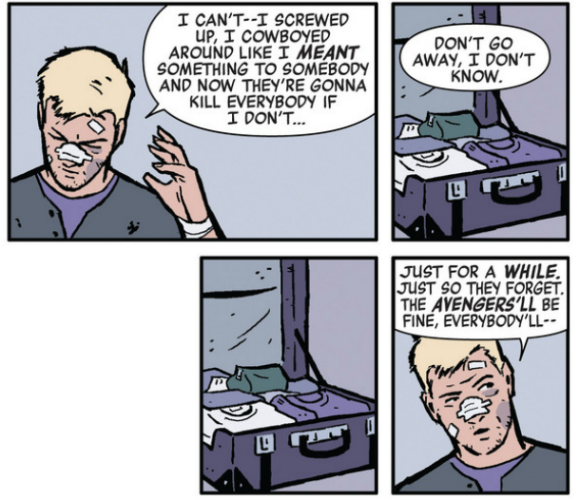 It seems easier for him to leave. But he stays. And watches a Christmas special with some neighbor kids. 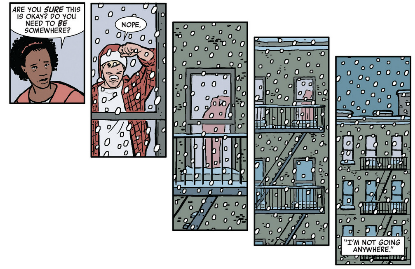 It’s kind of the “It’s a Wonderful Life” scenario. A good man talked out of a bad decision by realizing what it is he has, and that he’s not alone, and he should fight for it. But it’s not presented as an homage to that. There’s no point where Clint Barton wishes he had never been born. He’s just a crime fighter who happens to find a sense of responsibility and community during the holidays (after being severely beaten by a gang of trashy gangsters). This is why people refer to films like Die Hard, or Kiss Kiss Bang Bang as their favorite holiday movies. The creators here are just trying to tell a good story that just happens to take place during the holidays. They’re not forcing goodwill or nostalgia for holiday specials past down the reader’s throat.

Also, I seem to recall a classic Superman story where his rocket lands in the North Pole rather than Smallville. Someone please tell me if this exists, as my googling cannot find proof at the moment. If it does exist, it’s pretty enjoyable. If it doesn’t exist…well, then someone get me a job writing DC’s next Holiday Special! Hypocrisy!