Last year, DC Comics relaunched their entire superhero line by canceling every title it was publishing, and launching 52 series starting at #1. They also made all the heroes younger and restarted their histories and made me type this goddamn stupid sentence explaining it all.

Now (haha, now), while I have been trumpeting comics that are outside the super hero genre, I am still susceptible to stupid marketing names, and on top of that, Marvel does seem to be pushing this as a creative-team focused relaunch, rather than a “everything you know about the characters is different” approach. This week, I bought a couple issues of from this venture, and I think most of them are pretty good entry points for people looking to check out some good comics.

Fantastic Four seems to offer a continuation of what has come before. That was my first reaction anyway. The challenge presented for a creator on any of these titles is maintaining a faithfulness to the concept while also making it interesting and relevant and interesting for readers new and old. Simply parroting out the core concept of a character or characters without adding anything to it…well, what you get in those instances are forgettable comic books, or memorably shitty comic book films: Fantastic Four, Fantastic Four: Rise of the Silver Surfer, The Amazing Spider-Man…I could go on, but that would not help anyone.

Upon re-reading this issue, I feel like it’s a great re-introduction of The Fantastic Four. Writer Matt Fraction (yes, I know I’m all “Fraction, Fraction, Fraction” lately, but, well, Shut up.) and artist Mark Bagley are so far presenting a great looking family adventure comic.

Fraction’s got a pretty good grasp on each character dialogue-wise. In this first issue Reed, Sue, Ben, Johnny and the kids all stand out from each other, and the premise for this run is laid bare: the adults are bringing the kids with them on adventures to be closer to them…and because their powers might be killing them.  While some of Bagley’s “normal” looking people have very similar faces and expressions, he’s really bringing his best work to the bigger, weirder moments and characters, so I can’t wait to see him cut loose on more adventures as the series continues.

Deadpool offers a fast paced and funny comic book, with Tony Moore’s art offering as many visual gags as there are one-liners uttered by Deadpool and almost every other character in the book. Said one-liners are written by Gerry Duggan and Brian Posehn, and while the supporting characters seem to get the better material in the first issue, by issue two nearly every joke by the wise-cracking mercenary is landing, too.

The second issue offers a battle with Teddy Roosevelt (I LOVE TEDDY ROOSEVELT AND ILLUSTRATED CARICATURES OF HIM!!!) that is sprinkled with a few Looney Toons-esque moments. And this slapstick filled smackdown is just a small portion of the greatness that is this issue. There’s also Electricity Ghost Ben Franklin. Let that sink in, then go buy these comics.

X-Men: Legacy is something that didn’t interest me as a concept. “Professor Xavier’s crazy son goes off on his own to fulfill his father’s zzzzzzzzzzzzzzzz.” But I heard some good buzz about it, so I decided to check it out. Simon Spurrier and Tan Eng Huat have created a book that embraces and rejects the X-Men concept at the same time.

Or maybe it doesn’t. I honestly don’t know yet, because in the first issue, these two creators build two worlds and then shatter them, leaving me curious as to what will come next. I honestly think this comic would be even better for someone with almost ZERO knowledge of the X-Men, so if you’ve never read an X-Men comic before, but are interested in exploring the trials and tribulations of a powerful and extremely unstable young man, check out X-Men: Legacy.

And, as my title said, Hawkeye is still running strong. It also technically fits into Marvel’s NOW! initiative of pairing fantastic writers, though it is thankfully free of that silly red all caps branding. This story arc has Javier Pulido subbing in for regular artist (and cover artist) David Aja. According to the letters page, Pulido and Aja will be swapping on story arcs, and after this excellent issue, I am more than OK with that. I’m not going to go into the plot of the issue. Just imagine me projecting you a slideshow of some awesome panels. 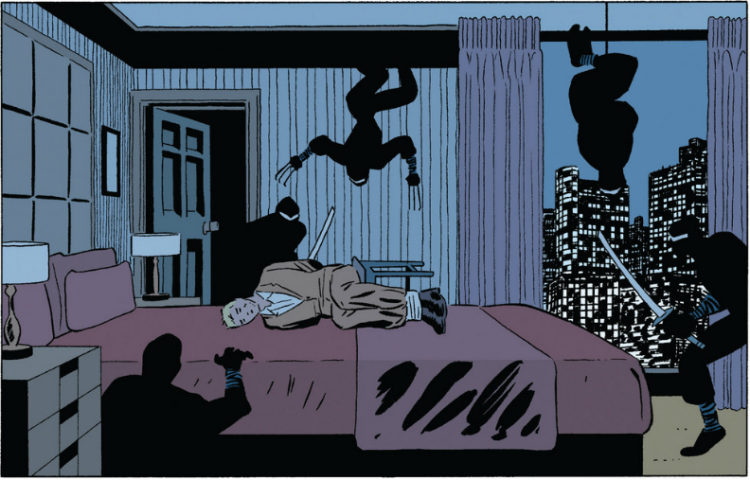 Awesome panel slideshow aside, this is shaping up to be a great book that will define Hawkeye as more than “the dumb guy with a bow and arrows.”

So, I’m pretty impressed with Marvel’s…ugh…NOW! efforts that I’ve read thus far. I bought these all on Comixology, and you can too if you’re someone who has been looking for an entry or re-entry point into some Marvel Comic Books. Both the creator focused marketing and the quality of these comics gives me some hope that Marvel isn’t just churning out books soullessly in support of other media endeavors, but is going through a period of experimentation again as they did in the early 2000’s.