I hereby declare this…VAMPIRE WEEK! Yes, much like Shark Week, except Sharks haven’t been neutered by a series of crappy teen romance novels and films. During Vampire Week I will attempt to remind you that Vampires are great, mainly through comic books, but I will sprinkle in some references to great vamp literature, films, and television.

Today’s comic has it’s roots in film and television, as it’s a short story collection set in the Buffy the Vampire Slayer universe. First concern that you surely have, you DO NOT need to have any knowledge of Buffy going into this. This is simply an anthology of tales about vampires set in that universe. If you like this, I’d encourage you to check out the television series, but not the film that started it all. That film is garbage.

This book has a number of great comic book writers and artists contributing to it, including Joss Whedon (Creator of Buffy the Vampire Slayer, Angel, and director of a little film called The Avengers), Ben Edlund (Creator of The Tick, as well as writer on television shows Angel and Supernatural), Sean Phillips (artist/creator of Criminal, Fatale) and lots of other talented folks. It’s a bunch of short stories, so I’m going to highlight a couple panels from my favorites.

Above, we have a panel from “Jack” by Brett Matthews and Vatche Mavilan, which is a take on the Jack the Ripper murders, with vampiric twist (or TWO!).

Another favorite is “Antique,” written by Drew Goddard (Writer/Director of The Cabin in the Woods) and drawn by Ben Stenbeck. This is probably one of the stories that’s more steeped in Buffy continuity, and features Buffy(the titular vampire slayer) fighting Dracula to get back her friend, Xander. Only Dracula’s not holding Xander hostage for villainous reasons. It’s for reasons of friendship. You see, Dracula is very, very lonely.

The fifth season episode “Buffy VS Dracula” is also quite excellent, and again features Dracula as an annoying antiquity rather than the be-all end of vampires.

Finally, my favorite, “Taking Care of Business.” It’s written and drawn by Ben Edlund. A vampire who used to be a priest goes around eating priests. He meets what he believes to be his latest victim: a fat priest who claims to be God. 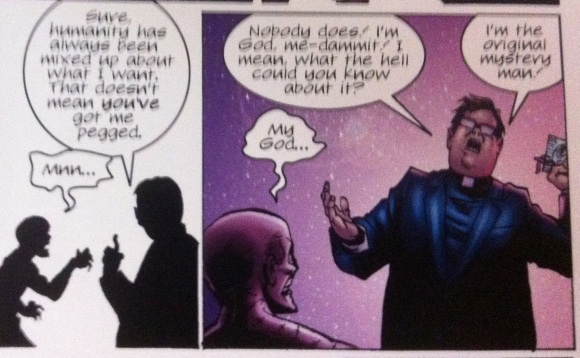 In addition to the wonderful “I’m God, me-dammit” line, this short is hilarious, and has a great punchline.

It’s a great collection if you’re looking for something fun and vampire-y to read ’round Halloween time or any time of year. Dark Horse has their own digital storefront where you can buy it here: https://digital.darkhorse.com/profile/2267.tales-of-the-vampires/

You can also get it on Amazon, or from your local vendor of comic-bookery.

So that’s our first installment of Vampire Week. A short post on a collection of short stories with hopefully some interesting enough teases that will get you to check this out. Next up: SOMETHING!