Before I get in my words about why you should read this book, a better writer than me, Abhay Khosla over at The Savage Critics, has some reasons. Go over there and read it, I’ll enjoy a cocktail while you’re gone.

So, for the folks who didn’t hop over, I really think you should. In the meantime, can I get you anything? A cocktail? An omelet? Cherries jubilee?

Ok, is everyone settled back in? That was awesome, right? 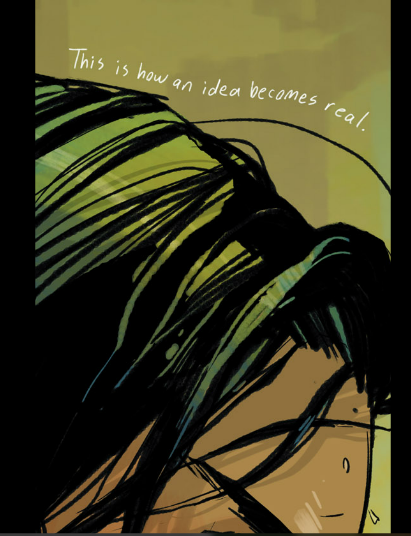 Saga, by Brian K. Vaughan and Fiona Staples, opens with the line “This is how an idea becomes real,” instantly drawing parallels between the birth of a child and the creation of a story/art. It’s not easy, or entirely fun for the parties involved, but something beautiful can come out of it. Once the kid is born, we jump right into things. There’s a war. Between a faction of some Magick the Gathering type folks, and some people led by a guy with a TV-head. So it’s a war between Sci-Fi and Fantasy. The ultimate geek/nerd throwdown. Moreso than Star Wars VS Star Trek, this is what it’s all about people. And caught in the middle? Marko representing Fantasy, and Alana representing Sci-Fi; have fallen in love and just given birth to Hazel, who’s our narrator for the series. 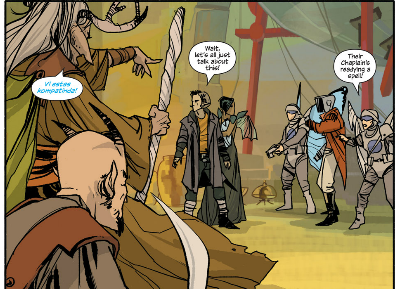 Saga evokes the feel of 70s-80s Sci-Fi and Fantasy films but is not derivative. It’s fun, there’s a sense of danger, and there’s a believability both in character and character design (Like, anything with a believable guy in a suit creature: Predator, Star Wars, the little midget aliens in the beginning of Night of the Creeps…things I can believe exist during the course of a story). There’s no winking references to beloved franchises. Yeah, A flying monkey pops up in the first issue, but no characters stand out as straight up pastiches of existing characters. 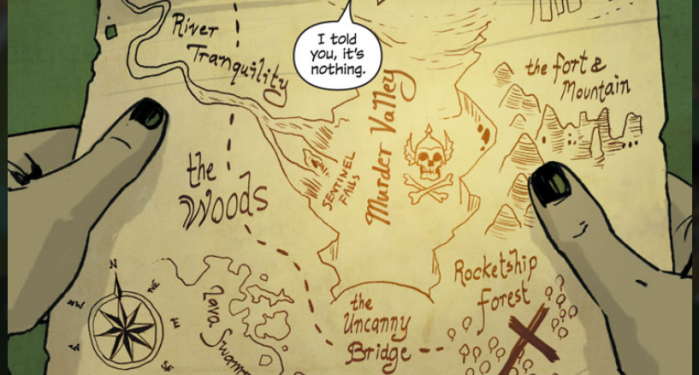 However, there’s something at work that feels like imagination and storytelling are important to this world. Based on the map above, which is taken as a legitimate map by the main characters, a world where “The Uncanny Bridge” and “Rocketship Forest” are real locations. There’s also moments in issues 2 and 3 where the forces of the Sci-Fi faction are confused by a romance novel. So another genre is thrown into the mix, and it’s one that’s foreign to the people of this world. Hmm. The only trap I could see the series falling into here is if it’s all taking place in some autistic kid’s snow globe.

Anyway, Vaughan and Staples have created a wholly different world, thus eliminating two of Vaughan’s biggest strengths/weaknesses as a writer: pop culture references and factoids. It still feels like his voice, but this is a world where he can’t fall back on a joke about Darth Vader, or insert a conversation about two characters’ favorite New York City Mayors (he’s totally done Star Wars in all of his work, and prior to reading Ex Machina, a story about a super-powered mayor, I knew nothing of NYC Mayors other than Ed Koch and his need to have a nosh). The playful banter that’s been enjoyable in his books like Runaways and Y: The Last Man is definitely present in Saga, though. It’s nice to see that Vaughan’s dialogue is able to stand on it’s own, that his characters are able to stand on their own, without history or pop culture facts to prop them up.

Now, the art. Oh my, the art. Fiona Staples has a loose but confident line, as well as brilliant character design. Check out “The Stalk,” a badass bounty hunter. I honestly can’t think of what I’ve seen that is like this character. A hot/scary spider-lady? Not ringing any bells. You’ve got to wait until issue 2 for her to appear, but when she does? It’s all kinds of (and I’m going to probably quickly wear out this word’s welcome) awesomesauce. Boba Fett, you’re done. And this bounty hunter’s not getting taken out by any Sarlac pit.

Staples is responsible for the color as well. I just learned this right now, while looking up who to credit for the following panels. A little context for my praise. Recently, some comics have tried to emulate movies and television, cutting back and forth between talking heads. This results in copying/pasting the same face sometimes and really lazy, boring storytelling. That is not the case in Saga. Whether or not Staples is using the same drawing as a basis for the panels on this page is irrelevant because she pulls off the feeling of time passing through color.

And geez, this panel? I don’t even know what to say. It’s in issue 3, so you either need to buy all three issues now, or keep staring at my blog to see it. I recommend buying the issues. 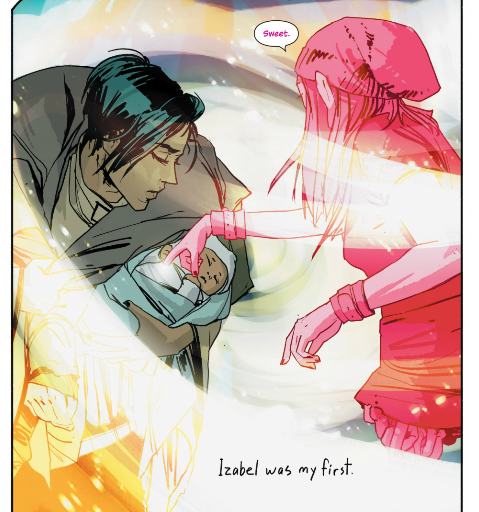 This comic is beautiful. War between Fantasy and Sci-Fi. Love between fantasy and Sci-Fi resulting in the birth of something new. It’s restored my love of the single issue. This isn’t a series you’ll want to wait for a collection of, though I’m sure that’s beautiful too. This is a serial, and a serial done right. That’s a sentiment you’ll hear echoed around the interwebs, and it’s absolutely true. I can’t wait to see what Vaughan and Staples continue to create.

pauldekams Paul DeKams is a socially awkward malcontent working in marketing in New York City. So, yeah, he’s a writer. He's written a few independent film projects, written a blog about comics, and even has an embarrassing Live Journal you can find if you try really hard.
Published July 1, 2012February 6, 2015

One thought on “Saga, Issues 1-3 by Brian K. Vaughan and Fiona Staples”