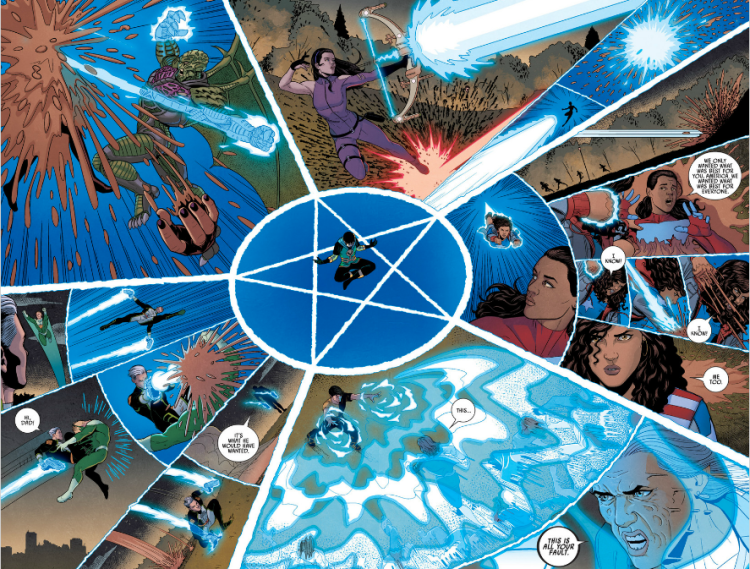 You may not know this, but there are new comic books every single week.

They come out on Wednesdays. All due respect to Odin and his day, but Wednesday is done. Let New Comic Book Day shine forth as a beacon of hope in a weak full of Tuesdays and Thursdays and…Mondays.

But let us return to the magic of new comic book day. Its a day on which you can discover something magical that you’ve never read before, or read the latest exiting installment of a series that you’ve been waiting at least 30 days for.

On this new comic book day, I purchased two such gems.

This must be Kieron Gillen week here, in which I rave about his work on two Marvel books in the beginning of the week, then lament that I didn’t tell people to buy his indie work instead, then tell you how awesome his new Marvel work with his indie collaborator Jamie McKelvie is! I know! I’m crraaaazy. Like a used car dealer’s pricing model!

But hey y’all, this comic is GOOOOOOD.

Issues 1-5 of Young Avengers have dealt with a group of super powered teenagers battling their parents. And dancing. And flying in spaceships named after influential comic artists that are powered by imagination. Let me re-type this for posterity and for those of you that lack reading comprehension and would need me to type in all caps to give this the proper emphasis: Spaceships powered by imagination. Yes. Even questioning such a thing would cause the ship to crash, so the characters themselves have to suspend their disbelief in order to keep themselves suspended in the air.

Here’s where a GIF of someone clapping should go in honor of the excellent comic book that Gillen and McKelvie have produced.

So Young Avengers #5 fits the criteria of “eagerly anticipated series I’ve been following month to month.”

Subatomic Party Girls is the new discovery that made me all tingly and such with excitement. 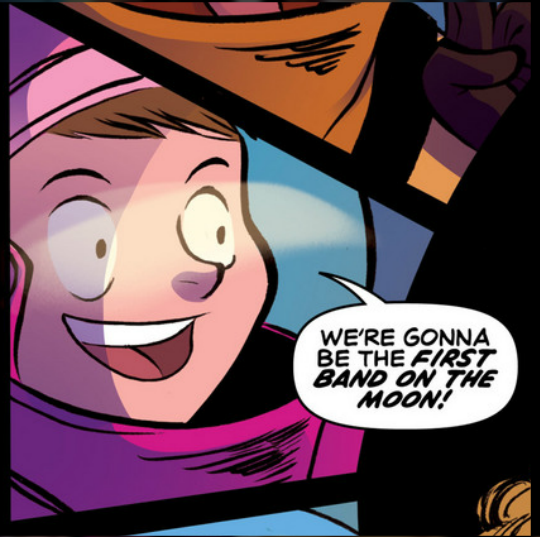 The enthusiasm from creators Chris Sims, Chad Bowers and Erica Henderson bleeds off the page. It also does the page bleeding equivalent of that on my tablet screen, too.

It’s about an all-girl band called Beryllium Steel, that’s about to be the First Band on the Moon! They wind up getting blasted into space much like Mike (and later Joel) of Mystery Science Theater 3000, though it appears they will have space adventures with space pirates rather than watch bad movies.

They space rock out while space training for space rocking.

I don’t want to give up too much more about this comic. Henderson’s artwork is loose and kinetic. At the risk of being repetitive (while being too lazy to consult a thesaurus), I will say that her artwork is “fun.”

Bowers and Sims’ dialogue reminds me a bit of Gail Simone’s early work on Killer Princesses and Deadpool. Mainly for their ability to bounce bubbly characters off of comicly grumpy characters in order to aid in wackiness ensuing.

Look at that!!! There is a space cat pirate lady and she is grumpy as all hell while a space aardvark is dancing happily in the background. If that is not fun, I do not know what fun is. If I am correct about the fun-ness of this panel, the comic, and the authors’ intent (which appears to be having fun), then Subatomic Party Girls looks like F-U-N, and a great addition to my pile (well, digital pile) of comic books that I have to look forward to on New Comic Book Day!

Subatomic Party Girls (still loving typing it) is also only a mere 99 cents. So if my words have convinced any readers of my blog that they’re even slightly into checking it out, I’ll buy an issue for the first person that leaves a comment saying “Hey, Paul. I’d like to check that comic out, it sounds pretty good.”