Well, to kick things off, let me start by saying that there is a lot you don’t need to read, and a lot you probably shouldn’t read. Iron Man has done a number of weird things over the years including starting a team called “Force Works” (I guess they were supposed to be violent and stuff?), having a mullet, being mind-controlled and becoming a murderer only to be defeated by a teenaged version of himself that took his place who then…became the same old Tony Stark from before…or something. Also, his suit gained sentience and wanted to marry him on a tropical island. ALL OF THESE THINGS HAPPENED. Does your head hurt? Mine does. If you don’t believe me, go to Wikipedia. You’ll probably come out of it wishing you had simply taken my word for it.

Anyway, if you’re looking to read about a Tony Stark/Iron Man that’s pretty similar to the one crafted by Jon Favreau and Robert Downey Jr (and perfected by Joss Whedon and Shane Black), these are the books you’re going to want to read: 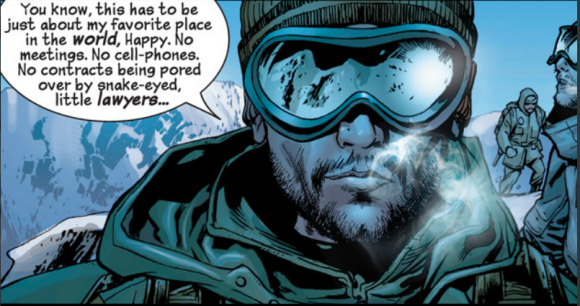 The Ultimates was the movie version of The Avengers before there was a movie version of The Avengers. Bryan Hitch illustrates widescreen action like few others, and with writer Mark Millar, presented a version of Marvel’s super team that existed in a more “real” world. Tony Stark is an adventurous, hard partying playboy, and all the characters are dicks to each other (YAY). Also, this is the comic you have to thank for having Sam Jackson play Nick Fury. It’s an entertaining (though almost ridiculously cynical) read, and the first two volumes are almost like storyboards/concept art for Whedon’s Avengers. I thought it was REALLY cool in college. Now I think it’s still pretty cool.

Warren Ellis and Adi Granov’s relaunch of Iron Man in 2006 presented a modern origin for the character, while also upgrading his tech in the present day with Extremis.

Granov went on to design the armor for the first two Iron Man films. He also brings a widescreen, movie-esque approach like Hitch, but has a cold and digital photorealistic look for his characters. It feels detached. It’s harder edged. Ellis and Granov put Stark in situations where he has to kill to survive. Ellis, in addition to being able to write tough but caring characters, also researches the shit out of science. And it shows in this book. This is probably the most science-y Iron Man book that has ever scienced.

Matt Fraction and Salvador LaRocca’s Invincible Iron Man came out almost immediately following the first Iron Man film, and features a much more Downey-influenced Tony Stark (though LaRocca seems to use Josh Holloway’s face as a reference for much of the second half of the series).

The run starts and ends with Stark in space. It begins with him confessing his nightmares to the reader and ends with him beginning to dream again. Fraction addresses nearly every single thing that has happened to the character over the years, yet manages to not induce suicidal thoughts like the Wikipedia page. It’s a greatest hits for the character, taking him through new highs and lows as his attempts to change the world as Tony Stark falter due to his attempts to save the world as Iron Man.

Fraction and LaRocca also assemble a great supporting cast, starting with Pepper Potts and James Rhodes (who each get multiple variations on the Iron Man armor) and growing to include a team of scientists that complement Stark’s own genius. At times, LaRocca’s photo-referenced faces get distracting, but he makes up for it with some beautifully drawn action, and well-rendered suits. 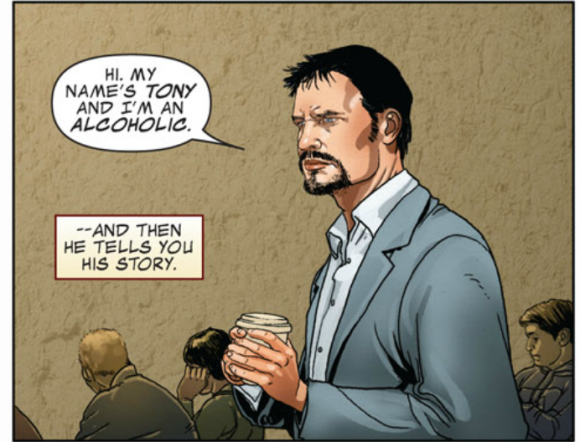 Fraction also brings the funny while adding dimension and gravity to Stark’s alcoholism. Under other writers its almost always been a gimmick, or something reactionary, to show how Tony feels awkward in party situations. Fraction has documented his own sobriety on his blog, and the understanding he brings to this aspect of the character really rings true without ever feeling preachy.

This is probably my favorite run of Iron Man, and the perfect realization of everything the character has to offer. If you’ve liked any of the Iron Man films, and want to check out the character in comic book form, Read These Comics!