Spoiler AND content alert. The following comic series I am about to tell you to read is NOT recommended for anyone who gets offended. Not just easily offended, but offended. PERIOD. There are no boundaries in this series, and I had to take a few breaks in reading it as it was published the past few years. While there were times when I considered dropping the series, questioning whether or not it was worth it, ultimately I think The Boys is a great series. It’s a commentary on the history of, and domination by the super hero genre in the comic book medium. It’s a commentary on corporate America and how things are mass produced, packaged and sold. It’s also about two people finding each other. So yeah, like many great works of literature, The Boys is many things, but it is not for everyone. So if AIDS monkeys, violent things done to AND by babies, violent things done to AND by bulldogs, gore or sex ring any of your “offended bells,” you should probably not read it, or my take on it, as I will be showcasing many of these things below.

Oh, hi! You stuck around. Great!

Many of us wish we could see this view. Superheroes flying above our city. Never mind being a super hero, but just to live in a world of super heroes, to live in a fantastical world…it would change things. It would make every day life amazing. Right? Right?

The Boys, created by Garth Ennis and Darick Robertson, imagines a world, in which superheroes (and villains) are the products of a corporation, Vought American. Their battles of good VS evil are all staged in order to sell merchandise, and ultimately, to get government contracts to provide super soldiers. 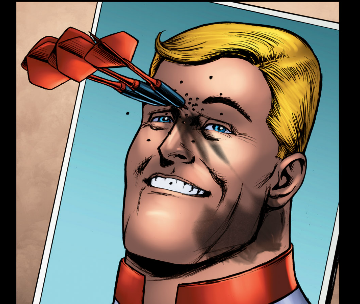 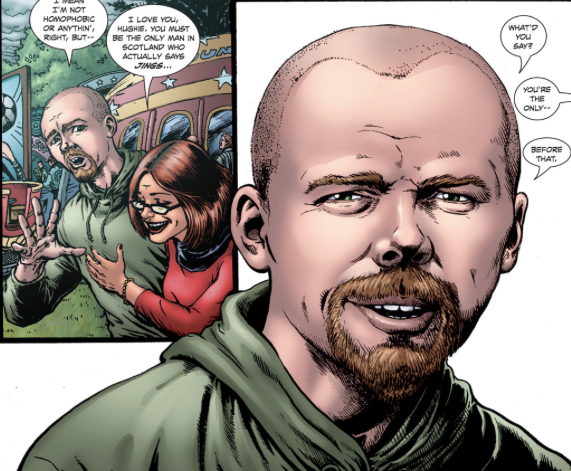 Hughie Campbell, Wee Hughie to his friends, is our audience surrogate. He’s an everyday, normal guy in love, whose life is destroyed by the careless antics of super heroes. 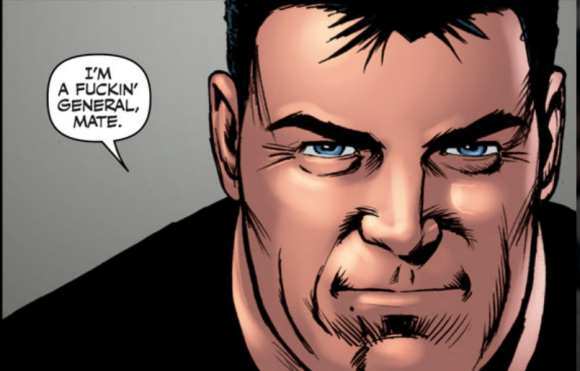 Wee Hughie is recruited into “The Boys” by Butcher (above), whose life was similarly ruined by super heroes. Specifically, by a super hero that raped his wife, impregnating her with…THIS: 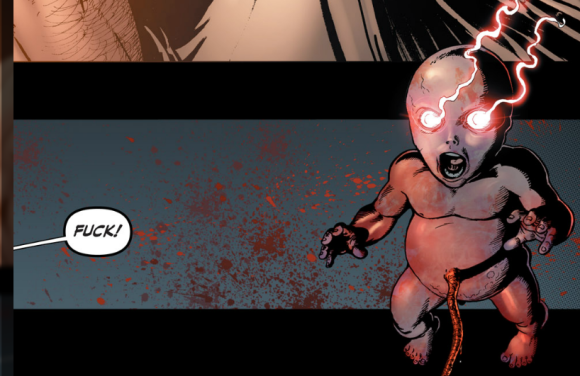 The Boys (Mother’s Milk, The Frenchman, and The Female) all have similar stories of lives ruined by super heroes, making them ideal candidates to police the super heroes that get out of line through blackmail, beatings, mutilation (eyeballs flying EVERYWHERE), and murder, murder, MURDER.

But that’s all surface. I mentioned AIDS monkeys earlier. I wasn’t joking. But Ennis was. Garth Ennis creates believable, tragic, and lovable characters. He puts them through the best and the worst, sometimes hilariously. He puts his characters through these heightened over-the-top “worst moment of your life” moments both to entice you by wondering how he’s going to top these moments, and to endear these characters to you even more. It makes the moments when they get a win even better.

So Ennis writes up scenarios that present the worst the human body has to offer, Darick Robertson draws every gory detail (with John McCrea and Russ Braun picking up art duties once Robertson had to leave the book). Robertson (and later Braun) can really make the characters of The Boys emote, evoking sympathy for even the worst of them.

The other thing that’s interesting about The Boys is the time in which it’s been released. It’s final issue has come out almost a year into DC Comics “New 52” reboot and at the beginning of Marvel’s “MARVEL NOW!” relaunch. These things happen every couple of years in super hero comics…”Everything is new!” “We’re going after younger audiences!” “We’re trying to appeal to people who haven’t read comic books before!” “We’re trying to capture an EDGIER audience!” But at the core of each, things are the same. And in a final scene in issue #72, Ennis offers up the case that they will always be immature, stupid (borderline retarded, really), perverted (one superhero is posing with an erection, completely unaware of it) and violent. No matter how it’s packaged, the product is going to remain the same.

It’s a bleak view of the comics industry. It’s a bleak view on politics as well. But don’t come out of this review thinking that you’re going to come out of reading The Boys depressed. It’s rough, yes, but I told you there’s a love story, remember? Not only that, but there are moments that true, honest-to-god humanity shines through. These scenes are beautiful, and Ennis, Robertson, and Braun do a spectacular job showcasing them. I’m glad I stuck through the worst these characters went through to see where they would end up, good or bad. Ennis and Robertson told a compelling story, but more importantly, they made me care about a group of people THAT DON’T EXIST for 3 or 4 years, and that’s one of the best tricks you can pull off in fiction. I love The Boys (both the series and Butcher, Hughie, Mother’s Milk, Frenchie, and The Female), and I hope you’ll check it out, cause I think you’ll find yourself loving it (and them) too.

You can get the whole series on Amazon, at your local comic book store, or on my favorite, Comixology.

One reply on “Violently Dismantling The Super Hero Genre: The Boys by Garth Ennis and Darick Robertson”

[…] rough too. Paul: Oh yes, most definitely. On both counts. (FYI, a more grisly/brutal pairing is Garth Ennis and Robertson on “The Boys”) Forrest: And poor old Charlie Brown. That is supposed to be a reference, right? I was scratching […]