There’s two things I really love about Grant Morrison’s New X-Men and BOTH of them begin with the letter U. But first, for those  hearing about X-Men and mutants for the first time, mutants are super-powered beings whose mutations (super powers or deformities) manifest at puberty. The X-Men are a team founded by Professor Charles Xavier to protect mutants from a world that fears and hates them. And on a metaphorical level, Mutants are young people, they’re teenagers, they’re minorities, they’re anyone who FEELS like a minority (again, teenagers).

1) Uniforms: Grant Morrison and his artists put the X-Men back in uniforms (for awhile they all wore…whatever. There were pouches…so many pouches). The first X-Men movie did this first a few years prior, but these were way cooler. There’s kind of a variation of these in the film X-Men: First Class, but I think they worked a lot better on the page.

2) Ugly Mutants: For the most part, “ugly mutants” in X-Men comics were blue. Fuzzy and blue. Essentially Muppets. Yeah, there were some weirdos living in the sewer, but where would they fit in a swinging soap opera with super powers? No one wants to bang an ugly mutant. Well, except for OTHER ugly mutants, and the trashy girl who smokes (she makes out with this dude).

But Morrison really took the X-Men to a point where he boiled them down to their essential concepts.

For the sake of not having an absurdly long title, I cut mentions of the artists. BUT, here’s who collaborated with Morrison on New X-Men: Frank Quitely, Ethan Van Sciver, Igor Kordey, Lenil Francis Yu, John Paul Leon, Keron Grant, Phil Jiminez, Chris Bachalo, and Marc Silvestri. Each one contributes their own unique style, but maintains the “try to keep up, gonna throw a lot of weird stuff at you pace” that comes with a Grant Morrison comic book. Lenil Francis Yu draws one of the more experimental issues of the series, which is entirely “widescreen,” in which the character of Xorn, a mutant with a star for a brain in an iron prison (see weird stuff, thrown at YOU!), is introduced while Cyclops, Wolverine and the gang indulge in some espionage.

This is probably the best X-Men comic. Period. Whether you’re new to the concept, or coming into it from the movies, or grew up with them as a kid. Morrison and the artists he’s paired with never let you forget that this is all inherently weird. 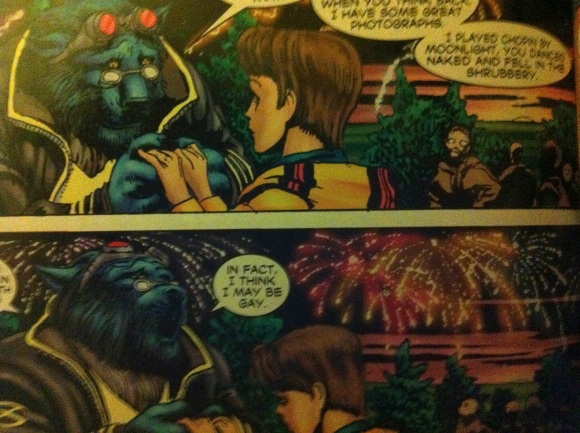 Hmm…I don’t think I’m doing a great job selling this, but I’m still gonna publish it, and keep this line in pondering it. BUT, this is the best X-Men comic. Beyond boiling the X-Men down to their basic concepts and doing it right, there’s ALSO aliens, evil twins, designer mutant drugs, harvesting of mutant organs, and as I’ve mentioned, weird bird guys making out with skanky girls with wings. If any of my terrible musing on this has interested you, you can buy this on Comixology, or get a couple of beautiful trade paperbacks like I have (that I am TERRIBLE at photographing as you can see from the panels above).

[…] also a great  companion book for anyone who enjoyed Grant Morrison’s New X-Men, as it expands on several characters and concepts from that run. Remender also revisits the Age of […]