I’m going to do something weird here, so bear with me. 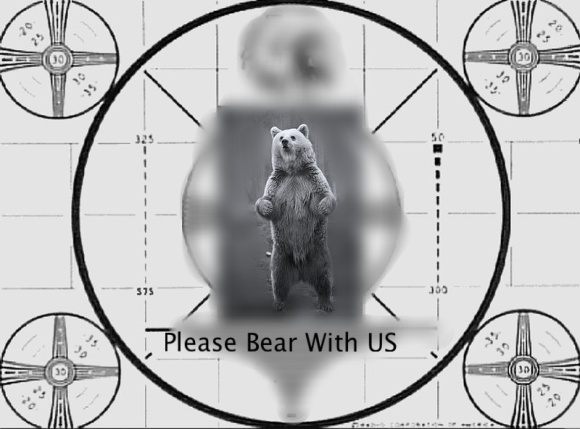 Ok, ready to indulge me? Of course you are! I’m not going to start with the beginning, or with the most recent volume. Today, we’re talking about Casanova: Gula, the second of three volumes of Matt Fraction, Gabriel Ba and Fabion Moon’s Casanova series. You most definitely should start with the first book, Luxuria, and read the follow up Avaritia. And then read the four books that are to come (there’s supposed to be one for each deadly sin).

I’m talking about Gula, because as I mentioned in my post earlier this week, this book really moved me. 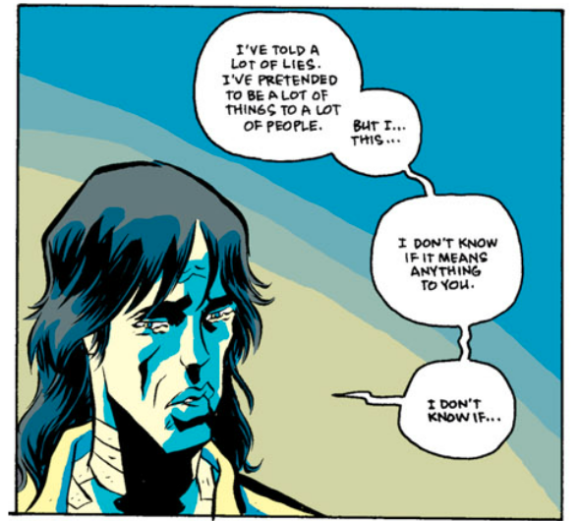 “I’ve told a lot of lies. Pretended to be a lot of things to a lot of people.” THIS. Man, on man. THIS. First off, this (again with the this?) is the titular character of the series, Casanova Quinn.

SUPER QUICK PLOT DOWNLOAD! Casanova Quinn is an international thief, hunted by his father and sister who are super spies UNTIL he’s brought into a parallel universe where HE is known as a super spy and his sister is a super criminal AND…shit, well, it’s complicated. And that’s mostly setup and dealt with in the first volume, Luxuria. This volume, the above panel? Well, it’s where shit gets real.

But that panel, and the scene that it’s a part of? I felt it. I really did. I could go into the anxiety I feel in being someone different to different people, but it would get all rambly. Short version, this comic book series gets me. On both a “real shit that I feel” level and on a “crazy fantastical action-adventure level.” 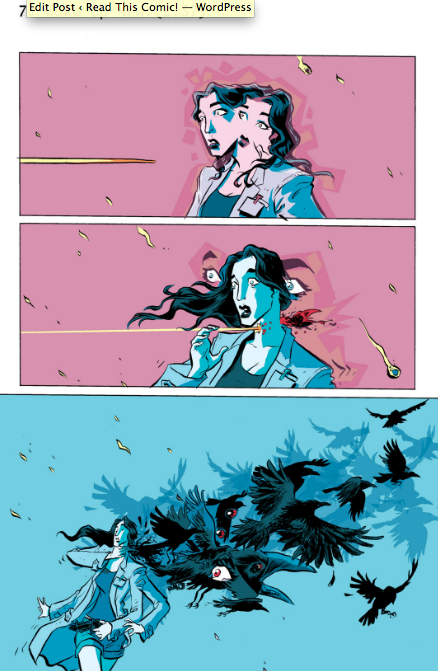 That page? Both levels at the same time. Art talk: Gula is drawn by Fabio Moon, while his brother Gabriel Ba draws Luxuria and Avaritia. They’re very similar, but I feel like Moon draws everyone just a smidge bulkier. I love both their styles. They manage to pull off kinetic balls to the wall action while making their characters emote like crazy. Also, Cris Peter’s colors are insanely good. Aside from this book and Hawkeye (which Fraction also writes), I don’t know of too many that use colors so effectively. And this series started out as a book with a two-tone color scheme in order to save money on printing and keep the costs down (It’s great in two-tone as well, but THE COLORS, DUKE, THE COLORS! Um, disclaimer I guess…if you are color blind, you may not appreciate this book on a color level like those of us that aren’t color blind do).

I tend to, or at least used to tend to read comics fairly quickly. Sometimes missing things and needing to go back. Reading panel by panel digitally has helped with this, but Fraction adds a suggested soundtrack to some of his comics. I haven’t done this yet, but I want to attempt to read a comic, with the suggested soundtrack, at the pace of the music. I will report back when I do so. 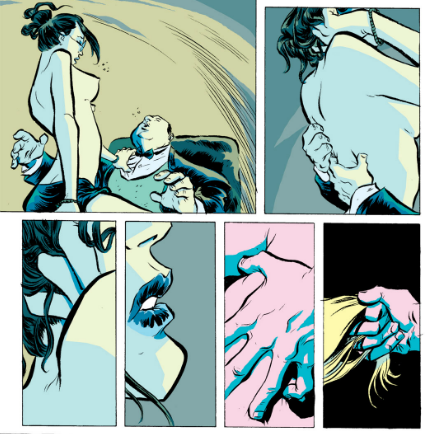 On top of you know, emotions and all that, this book is DRIPPING with sex. And not in a “Hey nerds” kind of way, but in a “We’re artists from Brazil, so we’re going to draw sexy art in a mature, artistic, sensual manner” sort of way.

And I think I mentioned balls to the wall action? What about…boobs in your face action? Like the “using an empty gun as a weapon move” that I’m so fond of, the “distract the opponent with boobs, then kick them in the face move” is one that isn’t used enough, despite it’s innate practicality, efficiency, and high success rate. 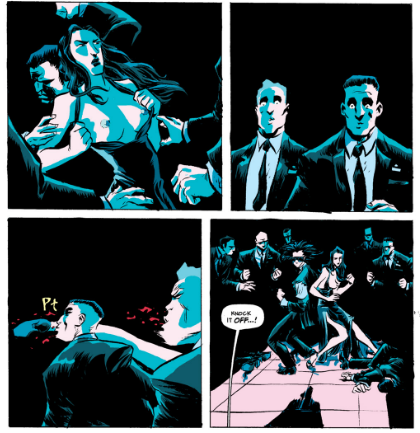 So I started kind of deep and then covered myself up with a few layers. This comic goes back and forth with that as well. There’s a lot of “Matt Fraction, Comic Book Writer” in this series, and how that makes him feel.

3 replies on “Casanova: Gula or Bear With Me As I Talk About Comics and Emotions”

[…] gushing all over his work…GUSHING…as you’ve seen in my reviews of Hawkeye and Casanova. I can’t say the dude has done no wrong because when he turns off his weirdness and tries to […]

[…] wrote about the mini series preceding Avaritia, Gula, a little while back. That is one of the few things I’ve written that I’ve liked recently. But enough about […]