My title is bitter, but I’m not. Maybe a little wistful? Definitely rambly. This is a rambly, introspective-y post about my comic collection and how I sold it. 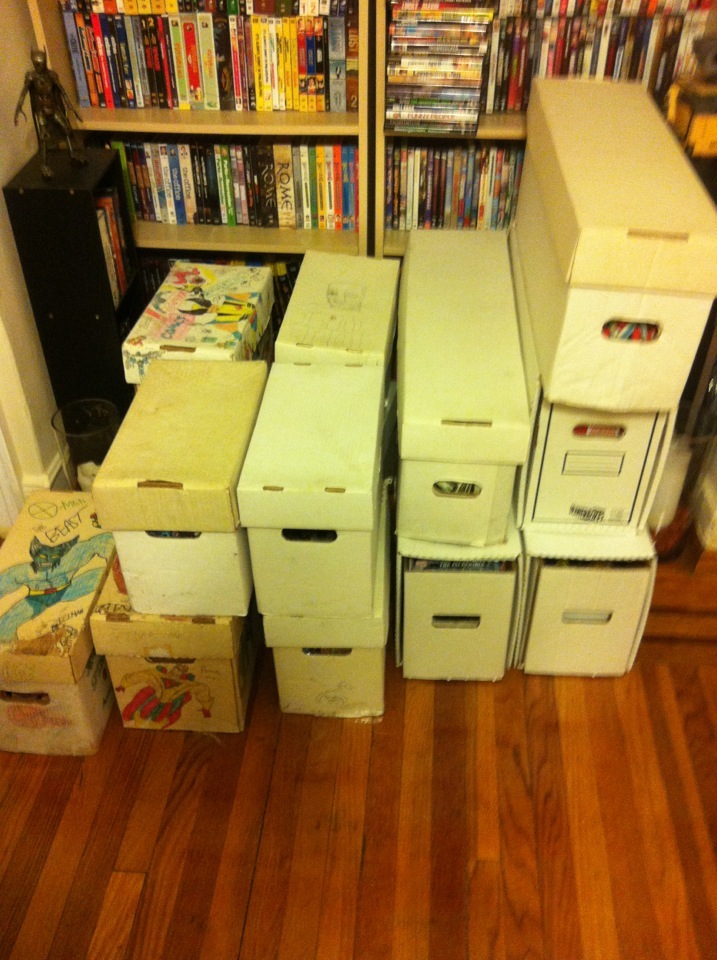 Moving makes you appreciate how little space you have. It also, in my case, made me appreciate how friggin heavy comic books are. Especially when you have a couple thousand of them.

The picture you see above? All gone. All of them. “Taken off my hands” for fifty bucks by a comic shop on Long Island. I wasn’t reading them. I wasn’t going to move them to the next apartment. I wasn’t going to break them up into lots and sell them on eBay.

To paraphrase Jesse Ventura, “I ain’t got time to (sell my comics on eBay)!”

I bought a lot of those comics for fun. For love of characters.

I also bought a lot because collector focused magazines published in the 90s told me they were going to be worth something some day. There was a point where I BOUGHT EVERY SINGLE X-MEN COMIC THAT CAME OUT IN A MONTH 3 MONTHS IN ADVANCE BECAUSE IT WOULD GET ME A VARIANT COVER. Ahem. Sorry for the all caps. But much like the times that I blew a portion of my savings on an expensive guitar, and another portion on a semi expensive (and instantly outdated) video camera; I really ponder what I was thinking.

I posted this photo on Facebook a few months back, when a local shop owner was supposed to stop by, make me an offer, and take them off my hands. The reactions, even from non-comics fans were “ZOMG! You can’t sell/get rid of those!”

It’s weird to think that there’s been a culture built up around investing in comics. It’s not supposed to be about that. Comics are art (though I suppose people invest in art), but comics are also entertainment. Who purchases or views a film with the expectation of a profit? Or does so with a book?

This culture arose because there weren’t reprints of comics. People were nostalgic. They wanted the comics that were a part of their childhoods but had been lost. And they were willing to drop a lot of money to get them back.

But now, not only are there affordable reprints, some packaged beautifully and recolored, there are also digital comics, making issues of comics like Jack Kirby’s Kamandi available at a mere 99 cents an issue. It’s pretty awesome, but it also means that most comic readers my age who are hoping for any kind of profit on their collections are probably shit out of luck.

I kept two long boxes. Plus a bookshelf and a half of hardcovers and trade paperbacks. Aaand the hundred something comics I’ve bought digitally. I’m still reading comic books. But I’m not hanging onto the past anymore, or hoping for a comic to get better simply because I love a character.

I’m reading and buying what I want to, and telling you about it here.

3 thoughts on “Kevin Smith Funded A Movie With His Collection, I Got Fifty Bucks”